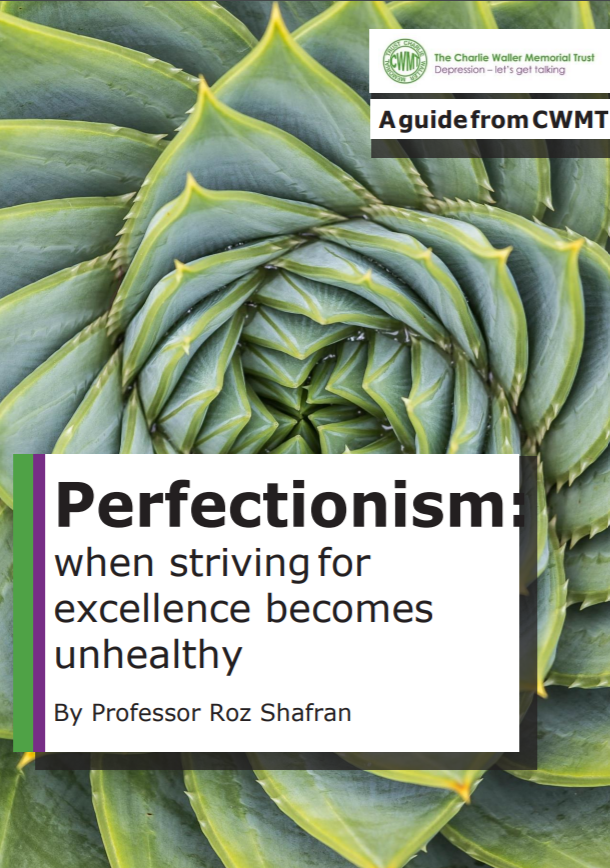 This leaflet is based on work conducted by Prof. Roz Shafran in collaboration with Prof. Tracey Wade and Dr Sarah Egan.

This resource booklet has been localised for the Hong Kong context and translated to Traditional Chinese by Coolminds, a mental health initiative run by Mind HK and KELY Support Group. For more information on Coolminds, please visit www.coolmindshk.com

We would like to acknowledge the Charlie Waller Memorial Trust (CWMT) UK for these resources and for allowing us to adapt this. For the original version of this resource, please refer to the CWMT website: www.cwmt.org.uk

Some years ago Jessica Lahey wrote in the New York Times: “We all know perfection is an unreasonable burden to place on our children but we also reward them when they strive for that perfection.” Her article was an attempt to understand the complex nature of perfectionism in today’s world where achievement is valued at almost any price.

“People with unhealthy perfectionism react to mistakes in an extreme and highly self-critical manner and are very uncomfortable with uncertainty.”

“People with a healthy striving for excellence have very high standards but the standards are potentially achievable”.

‘Tyranny of the Shoulds’

People with unhealthy perfectionism often have the same very high standards but the standards are not realistic or only attainable with significant negative consequences; such people react to mistakes in an extreme and highly self- critical manner and are very uncomfortable with uncertainty. The self-esteem of such perfectionists is almost exclusively dependent on striving and achievement but they constantly perceive themselves to have failed and live in fear of such failure and what it means for them. Such perfectionism was described almost seventy years ago as the “Tyranny of the Shoulds” (Horney, 1950). A few years later, Hollender (1965) painted the following clinical picture of perfectionism:

“The perfectionist finds it difficult to sort out items in order of their importance or to maintain a sense of proportion. A small detail that has been missed may deprive him of gratification from a job otherwise well done. He is constantly on the alert for what is wrong and seldom focuses on what is right. He looks so intently for defects or flaws that he lives his life as though he were an inspector at the end of a production line.” (p. 95)

It is not always easy to detect this unhealthy perfectionism and very often people themselves do not consider it to be a problem. Instead, it can cause difficulties for those around them. The area in which the perfectionism is expressed is also very important.

“Unhealthy perfectionism applied in the domain of work may lead to someone being labelled as a ‘workaholic’.”

These questions can help detect when perfectionism is interfering with functioning and is likely to be associated with low mood and anxiety.

Other types of perfectionism

There are other types of perfectionism that might also be posing a problem such has having high standards for other people and constantly feeling let down. Similarly, some people erroneously believe that other people have high standards for them and that they feel they are constantly letting other people down. In some cases, people are focused on the need to appear perfect and in others their perfectionism may predominantly be focused in an area such as sport or religion.

Until relatively recently, no treatment for perfectionism had been developed, partly due to the suggestion that perfectionism was an unchangeable personality characteristic. However, in 2002 the Oxford Centre for Eating Disorders (where I was fortunate to be working) proposed a cognitive-behavioural approach to perfectionism (Shafran, Cooper & Fairburn, 2002). Although it was controversial, it paved the way for research and multiple studies have now shown that the treatment based on this approach is effective both in terms of reducing perfectionism but also with respect to the impact that the treatment has on other difficulties such as depression and anxiety.

The treatment can be delivered individually, in groups, using a self-help book or over the internet. Some of the key treatment strategies are:

We have come a long way in our understanding of perfectionism and in developing interventions that work. However, there remains a great deal of work to do so that we can help people with a wide variety of forms of perfectionism and to see whether the interventions work for children and young people. We also need to make sure that people can access the treatments that they need in a timely way. I am hopeful that such ambition reflects healthy striving for excellence and an achievable goal, but only time will tell….